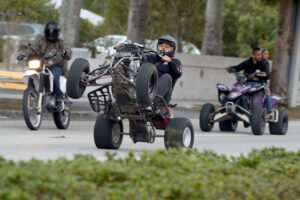 The City of New Haven amended a city ordinance that restricts the use of off-road vehicles on city streets.  According to Mayor Elicker the fines and restrictions just strengthen already existing ordinance that limits the use of these types of vehicles from riding on city streets.  The amendment will levy a fine of up to $2,000 for those who are caught.

While the Mayor has been clear that the city does not want to begin fining people or arresting people over the new amendment it has become a matter of public health and in certain cases can lead to a New Haven personal injury.  Bikes that are covered by the new amended ordinance include the following;

Not only will the drivers of these vehicles be subject to fines, but passengers will be as well.  A passenger on one of these all-terrain vehicles may be fined up to $250.  The ordinance takes it one step further to the gas stations where these bikes are being fueled up who may be on the hook for a $100 fine for every fill-up that occurs at their location.

If you ride an all-terrain vehicle on the streets of the city of New Haven, not only are you putting yourself at risk of injury you are also now violating an amended ordinance that could hit you hard in your pocket.

Contact our office if you’ve been injured or fined as a result of the new ordinance and one of our attorneys can review your case.